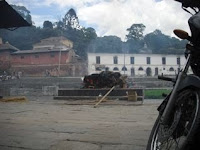 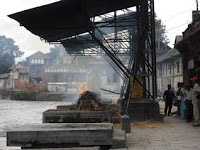 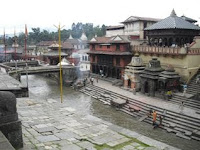 Waiting at the beginning of a long day of waiting. My fresh clothes are already damp and my shower fresh scent washed away by the excertions of airport check is and searches. Clouds have descended and the airport is closed, time to write I guess.
My work in pokhara is finished and I am making a 3 flight hopscotch journey to Mumbai where I start filming for a charity that works with trafficed sex workers in the city's red light district. That's tomorrow though I have to make a big effort to squeeze some enjoyment out of today it must be possible.
Yesterday I was filming a mobile health clinic that had set up under a solitary tree halfway up the the side of a deep valley. Women and children gathered to be examined and treated by a pair of doctors who administered drugs from a large medicine chest lying open on the grass. It was a calm and peaceful affair and there was almost a sense of communion between patient and care giver. Wide eyed babies well equipped to take in their surroundings. Glaciers squeezed themselves out of the mountains that gave the scene a theatrical backdrop they may have been more believable if they were paintings. There was the giant valley I was in with its ferocious river cutting through its wide green floor and beyond it mountains that really should have been clouds. It was hard knowing what was snow and what was cloud.
Clouds how do they manage to float? Two nights ago it rained for three or four hours but it was not rain like I had experienced before, this was like a waterfall so intense that if you swept your arm through it you were as wet as if you dipped it in a lake. Gallons of water, tonnes of wet, all coming from a cloud above - the thought of being crushed by a cloud.
Later ...
Just had a 5 hourstop over in Kathmandu so I hired a 20 dollar taxi hire to meet up with a friend Kassie who is an assistant professor of english here. The world is as small as ever, it turns out he knows thedriver since they were kids, the driver used to sell flags at the airport and kassie usedto buy them when he was flying out, kassie was so pleased to find out this guy had made it from street kid to taxi driver: progress he called it. We went to pashupati a very holy temple for shiva a bit like varanasi. extraodinary the mixing of death and life, people coming to cremate their relatives alongside stalls selling food, souvenirs and holy artefacts, monks, monkeys and tourists. Along the banks of the river stone plinths where the bodies are burnt and then swept into the dishwater coloured river where young kids swim and play. I sat for a while staring into the flames of a pyre slowly consuming a body pair its feet sticking out morphed from something certainly human to a joint of charred meat the leg attached to it moved up as the skin shrivelled . But what shocked me was seeing an iv drip bag and tube fall out and float off downstream. The smoke was impossible to avoid and of course it smelt like a barbeque the fats vapourised and seem to congeal and stuck in my throat. As I sit here I in the airport lounge I occasionally clear my throat and am uncomfortably aware of what the phlegm must contain. Is that cannibalism ?
I am now in Delhi airport waiting for the final jump to Mumbai we arrived at 5:30 and a temp of 38. I am going to sweat here.
I met an old hippy American at pashupati who was friendly enough and had been travelling in India for 2 years.Oddly Kassie was convinced he was FBI I was not convinced. I pushed him for health hints and he gave me a list of anti biotics and pills to kill all stomach bugs that he has been given. I have just been to a pharmacist at the airport. The young pharmacist took the list said it would be about 500 rupees (74 to the pound) the first box he pulled out was called I pill and I picked up the box thinking that maybe apple mac has gone into the medicine market. On closer examination it was a female contraceptive pill, FBI my arse.
Posted by The thumb is mightier... at 00:35