7th August 2009 How do you quantify luck 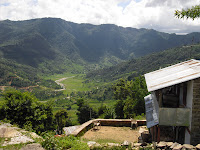 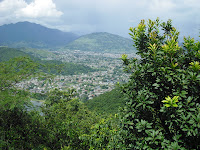 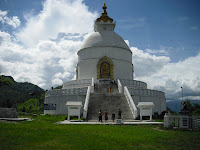 Pokhara nepal
So aywayyou look at it I'm lucky
It is amazing here I awoke to bluesky, backache and stubble sorted out by a simple trip to the barbers cum massage man 1 hr later smooth and pain free lovely. Then off to look at some waterfalls and a cave all part of the river that flows out of the lake around which the town sort of occurs. Then me and dasi the secretary from the charity I am visiting climbed up to the Buddhist stuppa that sits on a high hill above the lake. It was hot really hot quite funny leaving this trail of wet footprints from my
de-shoed feet around the holy place. The view was outstanding out over impossibly steep wooded slopes down in all directions with people living in huts and shacks with smallholdings wherever possible.daft that everything they have hasbeen carried there With my old knees the walk down was harder.I was thrown a bit when I came around a particularily vertigous bend to see myself reflected in a wardrobe that had been left on the path whilst a couple of boys rested in the shade, it was all quite normal to them whilst I was laughing like I'd finally escaped my care worker. . Vivid tho so vivid it's as if someone has turned the colour up on the tv and because it is so humid the smells seem stronger the foilage and the earth the tree bark I'm sure I smelt a butterfly pass me.
Back down and a journey back on the motorbike there is a driving system similar to the way ants move around each other except ant collisions are rarely lethal in the short time I have spent watcing them.
The hotel I'm in is embarrassingly luxuriousnbut I've made an effort to make my room a mess in solidarity with those outside its walls
Pokhara is a gap year tourist destination and that is half the problem here people from the hills come down and try and make a living from the dozens of baggy trousered dreadlocked miseries that scuff their way round the lakeside tourist district. I had to have a word ! Cheerup you're on holiday I said. What is about our gloriously alternative youth from Europe that makes them so sullen in the most beautiful. Places on earth ? Alltrying to out native each other,someone tell me was I like that ? Maybe it's thethought of the impending student loan or havingto goback home.
So I am off to meet some people I met whilst waiting for myflight yesterday nurse and doctor.
1hr later ...
Brilliant top food in an unmarked and unremarkable bar and cheap as lentils.very interesting tho I avoided the vaggie soup A nurse works a 6 hr day for 145 us dollars a month a doctor works a 5hournday but didn't get howmuch for.
Anyway they have gone but I am staying to eat mor food it's so cheap paneertika andveg biryani £2.00 my friendssaid it wasexpensive but it's cheaper than anywhere else I have found on the scuffing tourist strip.
Now I just need to find myself a wi fi somewhere and send this
Tomorrow hopefully no rain and I'm visiting a free health care clinic (would it be rude to ask them to look at my athlete's foot ?) and a vocational centre where street kids can bank their money so it doesn't get knicked that's advanced for you
Plse xcuse the typo errors but I'm on my iPod and it is tiny
Xx
Sent on the move
Posted by The thumb is mightier... at 01:50